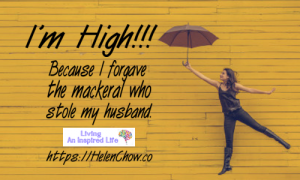 What triggered this, my discovery of forgiveness, the subsequent musings and hence this post, was that I wrote to iHerb (an online holistic health products company) to sort-of apologise for having been overly worked-up about an errant delivery of an important supplement I needed urgently, which problem was resolved very promptly. I thanked the professionalism of the customer care team of this excellent company.
.
I could very well have NOT written to them and left the matter at that after we had located the errant delivery. But I felt I wanted, needed, to write to them. So I did. It was for me, myself. And what I felt in the aftermath of the email I sent them was wave upon wave of being ‘high’ (no, no, not alcoholic high) and feeling, oh, so GOOD! I think it was a dopamine high, reminiscent of what saints, yogis and all spiritual people throughout time had spoken of… a sort-of Godhead, bliss. It felt really good. And I could very well happily get addicted to these sort of highs!
.
Let’s get back to this thingy again:
“It’s easier to apologise than it is for the person who is apologised to, to forgive the G R A V E,  U N F O R G I V E A B L E misdemeanour…”
.
This is something which has been lying, lazing, floating around somewhere in the back of my ‘how-to-solve-life’s-problems-and-mysteries‘ mind for ages and ages and ages. It resurfaces now and then, when I feel waves of indignation and (self) justified reasons why NOT to forgive. There is absolutely NO WAY that so-and-so can be forgiven for THAT act. Did you see what she did to me, or said to me? Don’t you see it’s absolutely abhorrent, and terribly hurtful and irresponsible of her/him/them, given what so-and-so and I did for her when she was down and out….Apologise for my harsh words??? No way! Not on your life! (I don’t mind carrying my cross up the hill.)
.
And so on and so forth. And this continued for the better part of my life. I spent 12 years in a Catholic school run by nuns where they preached forgiveness, among other concepts.
.
And the years and life continued their merry (or not so merry) ways for me. One day, in my 50s (and yes, if we live healthy enough lifestyles, there comes a time when this moment suddenly happens and simply thrusts itself upon us unexpectedly, want it or not), I reached a point in my life so profoundly unbearable that death seemed very welcome. I wanted out – of life. I was just so tired and worn out with the yoyo ups and plunging downs. So I asked God, Buddha, The Omniscient, whoever he, she or it, was to take my life. I was ready to go. I didn’t want any longer to struggle and fight an eternally, unwinnable battle with no end in sight. I just gave up and let go.
.
Then, a curious thing happened. I felt liberated. My life  circumstances had not changed, but I felt a dead weight lift from my heart (figuratively). I was still physically and emotionally tired, but there somewhere in the old dungeons of my despair, I felt a little flickering flame, valiantly trying to grow. Yes, unknowingly, I had crossed the chasm and had returned (Joseph Campbell’s: The Hero’s Journey – love this book. You must absolutely read it!).
.
Well, what has all this to do with our topic today, forgiveness? Yes, do be patient. I have to provide you with the background on the lesson I learned about forgiveness. So now, let’s continue.
. I plunged myself into recreating my life. The very first thing was my mindset. So there were Releasing Techniques, Self Talk affirmations,  The Diamond Sutra, Silva Mind Control meditations and visualisations, Abraham Hicks, TUT, John Assaraf’s Self Esteem – mine had taken a brutal bashing to smithereens, my own Tibetan mind observation exercise that I had discovered 30 years ago which works a dream to ‘catch’ your thoughts, and many more.

.
Many of my close friends saw me going around with ear phones plugged to a mini ipod. I was changing my mind/brain and changing my life. One of my goals is to raise my vibrations, to command them at will. Ongoing… 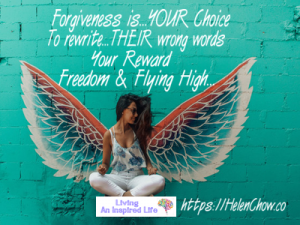 .
Now listen up. The forgiveness thing is probably an amalgam of all the above. However, one technique stood out head above the others. It was a little or BIG exercise: it was simply the ‘Thank you’ or ‘Appreciation’ or ‘Gratitude’ exercise. It’s simply being grateful, thankful and appreciative of everything in your life, big and small; good or bad ~ my crumpled face when I wake up, the fruit for breakfast, the dirty laundry, the sunny day…
.
At first, it was a chore and I had to program this exercise into my daily routine. But as I started making this a habit, I felt a glow within myself. I would start to tingle and vibrate inside, much like when I’d had a glass of my favourite, chilled Pouilly Fumé. But this happened without the Pouilly! With practice, I could begin to produce this sensation at will. And it feels ever so good! So I started thanking, appreciating all the good things and people in my life.
,
But then there were still niggling pieces of dislike, hatred and bad feelings, for example, the woman who had stolen my beloved Laura Ashley and silk fabrics, and trimmed the bottom off my satin curtains to steal that small piece of fabric…(???? how could one do something like this…). How could I thank her, let alone appreciate her? That really flummoxed me. One day, I understood this: desperate times make people take desperate measures, do what they wouldn’t normally do; do whatever can be done ~ to survive. A shift in perception unravels the destructive knot that binds people with hatred for one another.
.
I was determined to make my life work. So I extended my ‘Thank-You’ meditation to her. I bathed her and her husband in a ray of golden light and repeated ‘thank you’. This is still an ongoing exercise. The turning point has to occur, done long enough!
.
With time, I extended this practice to more people I didn’t like, including my ex-husband and his mistresses. Then I added people who had hurt me; swindled me; betrayed me. Whether real or imagined, it didn’t matter, because in the realm of the mind, everything is real.
.
I don’t plan to meet any of them again in my lifetime, but I could release myself from the negative energies I was holding inside myself. This exercise has to be done again, and again, and again, and yet again and again.

And once the turning point happens, it feels ever so good. So…this is how to ‘forgive’! I had found my own way, which works for me! You don’t do it for the perpetrators. You do it for you, yourself. Then in doing so, you are doing it also for humanity.
.
Personally, I do not feel that it matters whether the people I’ve had major tiffs with will ever like me or speak to me or contact me again. I don’t need them in my life. I shall not consciously initiate forgiveness or patch-up-let’s-make-up meetings. For I believe, that on an omniscient level, we are at one again now I have released the binding, imprisoning, negative energies.
.
One big, big gift of the practice of my ‘Thank-you-Gratitude-Appreciation’ exercise was this: My brother and I have been estranged for decades. It has been a difficult, uncomfortable relationship, to the point that I make it a point never to meet. I’m happier this way.
.
I started my ‘Thank-you-Appreciation-Gratitude’ exercise on him. I bathed him in a glowing light; I poured on the ‘thank yous” and repeated them like a mantra. I did this consciously many, many, many times. Then one day, the gift, so unexpected, happened: In a flash vision, we were reconciled and hugging each other. I didn’t will it or program it. The vision was a younger. smiling him, long before the estrangement. And now, I have good feelings for him. I have happy thoughts of him.
.
Now, reasons why who is right or wrong don’t matter anymore. Even I have forgotten why the estrangement happened or what it was all about. Or if I remember snippets of it, I ignore these and don’t give them any energy. On a physical level, I have no plans to meet up with him. But I am healed energetically. And because, I am energetically healed, he must be, too.

This is my interpretation of forgiveness. Not a forced one as many so-called gurus teach. Because, honestly, forcing yourself mentally to forgive someone his or your trespasses, DOESN’T work. At least, I’ve never heard someone who has admitted that it works. Most people I’ve met who talked about forgiveness said they would like to, but it’s so difficult. So in the end, the ‘forgiveness’ is only lip service and not an effective balm for the heart.
.
My own viewpoint on forgiveness, based on my own personal experiences, are these:

I once read long ago about a lady celebrity who, ravaged by cancer, was on her deathbed. In her beautiful bedroom where she lay dying, decorated with candles, bouquets of scented flowers, soft music and surrounded by all her loved ones, friends and family, she mumbled a “I love you so much. Thank you. This is GoodBye.” to all present. But with her dying breath, she added that she will carry her hatred for so-and-so (I think it was an ex-husband who had inflicted horrific hurt on her) with her to her grave. She didn’t want to forgive and so was buried with the hatred.
.
I now think that it was not that she didn’t want to forgive. She hadn’t known how to, and what liberating freedom it could have given her. Perhaps if she had used my exercise of getting high on forgiveness and the resulting peace, she might have changed her mind before dying. I hope she’s resting in peace somewhere out there.

This website uses cookies to improve your experience while you navigate through the website. Out of these, the cookies that are categorized as necessary are stored on your browser as they are essential for the working of basic functionalities of the website. We also use third-party cookies that help us analyze and understand how you use this website. These cookies will be stored in your browser only with your consent. You also have the option to opt-out of these cookies. But opting out of some of these cookies may affect your browsing experience.
Necessary Always Enabled
Necessary cookies are absolutely essential for the website to function properly. This category only includes cookies that ensures basic functionalities and security features of the website. These cookies do not store any personal information.
Non-necessary
Any cookies that may not be particularly necessary for the website to function and is used specifically to collect user personal data via analytics, ads, other embedded contents are termed as non-necessary cookies. It is mandatory to procure user consent prior to running these cookies on your website.
SAVE & ACCEPT
Copyright © HelenChow.co 2021 All Rights Reserved Worldwide        Receive Regular Inspirations ! Click Here        Contact